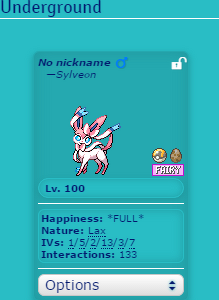 After the Pokémon has returned, there is a chance that it will have come back with an item. The most common items are evolution stones and valuable items, although summoning items and fossils can also be found on a rarer scale. In July 2010, three new Miscellaneous Items were added to the site - the Flame Orb, Heart Scale, and Focus Sash. In addition to being able to be found randomly throughout the site, these items were also made available through the Underground.

In May 2015, 19 Regional Flags were also added to the list of possible items that can be found in the underground. In March 2016, the Love Flag was added, for a total of 20 Regional Flags. These flags allow for Vivillion to form change from the site default "Meadow" pattern to the pattern corresponding to the flag. These Regional Flags are not used up upon form changing, and even have their own dedicated section in the inventory.

Pokémon can be removed from the Underground at any time, although they have a 100% chance of failure at finding an item. When Pokémon are able to return from the underground, a picture of an Explorer Kit will appear in the header next to the other notification icons. Additionally, your Pokémon has a chance to get infected with Pokérus if brought directly back to the party. Thanks to a recent update, it is now possible to send a Pokémon who has already been underground, back underground using an Escape Rope. Escape Ropes can also be found in the Underground, although they are fairly rare.