The Shelter is one of the two primary locations from which users can obtain new eggs for their party, the other being the Lab. Run by Alex and Thomas, it is divided into two sections: the Egg Shelter, which holds eggs released by users, and the Safari Zone, containing released, hatched Pokémon. All users begin with six Shelter Grabs a day, permitting them the ability to obtain a total of six eggs or Pokémon from the Shelter. Aside from this, the two sections operate independently, and are subject to limitations on the kinds of Pokémon that can be adopted. A Shelter Pass allows people who bought one get an additional four Pokémon from the Shelter. You can get more Pokémon depending how many Shelter Passes you buy.

Eggs "released" by players of GPX+ are deposited to the Egg Shelter. Both excess eggs created by their Breeding Pairs (including those created by Professor Cypress) and unwanted, previously adopted eggs will appear in this section, typically between 15 and 20 minutes after they are released. These eggs cannot be adopted by anyone who has ever possessed the egg.

The Egg Shelter displays up to 60 different eggs at one time, excluding the restrictions described below. The eggs displayed at any one time can be changed by clicking the "Show more" button or pressing the Space bar. Any eggs that are not adopted within 36 hours of arrival into the Egg Shelter are deleted every half hour; excess eggs of a particular species may be deleted sooner.

The Safari Zone contains all released, hatched Pokémon, again appearing between 15 and 20 minutes after they were abandoned. Pokémon depicted in the Safari Zone will bounce around the page randomly, at speeds correlated to their base Speed stat; thus, an Accelgor will shoot about rapidly, while Shuckle will crawl at a snail's pace. Like the Egg Shelter, Safari Zone Pokémon cannot be adopted by anyone who appears in their timeline.

Because of the larger size of Pokémon sprites and their ability to move around, only fifteen different species will be shown at any one time (though members of the same evolutionary family can appear simultaneously); like in the Egg Shelter, users can change which Pokémon are displayed at a time. Unadopted Pokémon will be deleted after 72 hours.

Both the initial number of grabs and those gained by interactions are enhanced by any multipliers active on the site. During a Site-wide Shiny Hunt, so long as the user has at least one shelter grab, adopting eggs of the target Pokémon will not count against their total shelter grabs.

The Sweet Honey item is also used during Shiny Hunts, Site-wide or otherwise. After hatching 15 of a Shiny Hunt Pokémon, a Sweet Honey can be used to bring up only that species' eggs in the Egg Shelter; if multiple Pokémon qualify, then the eggs displayed will be a combination of all qualifying Pokémon eggs.

To prevent hoarding of special eggs, users used to be limited in the number of Very Rare and Novelty Pokémon that could be adopted from the Shelter, as outlined below. As of August 2017, these limits no longer exist.[2]

On November 27th, 2010, GPX+ introduced the Dream World, a special, limited-time section that exclusively featured Fifth Generation Pokémon eggs in commemoration of Pokémon Black and Pokémon White. 44 of the 156 Unova Pokémon were initially made available, with new Pokémon added in batches up until January 7th, 2011. Users were permitted to take six eggs from the Dream World every day. Eggs not in a user's Pokédex would appear as "Mystery" eggs in the Dream World, depicted with the generic egg icon until it was adopted. Because the games had not been released in North America at the time, users could opt to hide the appearance of Unova Pokémon and eggs, replacing their images with the generic egg sprite on their end[citation needed]. Once the games were released in North America, the Dream World was removed, along with the option to hide the egg and Pokémon images; any eggs left in the Dream World were added to the Lab.

The Punishing A Poacher exploration was initially created to support the Dream World; the Black and White Token Account Upgrades allowed users to take four additional eggs from the area each day. Unova-based Achievements were also rolled out to commemorate the Dream World, starting with Unova Master and Pokédex Master Plus, which were added to the Base Set.

Two Achievements are associated with the Shelter: 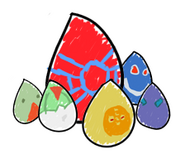 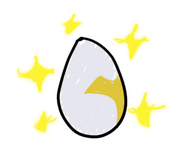