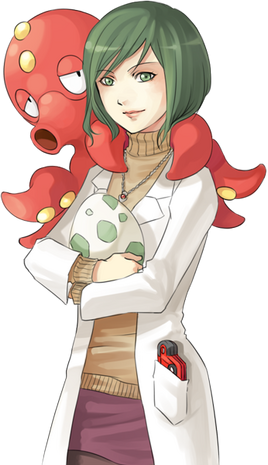 Like the Pokémon games themselves, GPX+ contains a fictional story of its own. Part of that story includes a resident Pokémon expert, much like Professor Oak; here, that expert is Professor Cypress. The fiction created for her states that she is trying to complete the most comprehensive Pokédex ever, including Egg and Alternated Color information, and is thus recruiting the various site members to help her on that mission.

Professor Cypress was drawn by Different Turret, also known as Shirogane, administrator of the VDex Project. Formerly, her art was by Rock N' Roll from FEPlanet. She is depicted as approximately 6 feet (2 meters) tall (based on Octillery being 0.9 m from the top of the head to the tips of its tentacles), with short, green hair and green eyes. Her age is never stated in the fiction of GPX+.

Developing the Global Pokédex Plus (in-universe)[]

When Cypress was 12, she encountered a strange, light-blue egg on the shore of a nearby lake. Taking care of it vigilantly, the egg soon hatched into a Remoraid. The two were inseparable, and apparently participated in battles, because eventually the Remoraid evolved into an Octillery. Watching other trainers trying to fill up their Pokédexes with information only on the hatched Pokémon, Cypress was inspired to take it one step further; record information on the eggs, as well.

Over the next few years, she collected a few more eggs (Aron, Chinchou, Rhyhorn, Combee, and the rare Uxie) before deciding to become a Pokémon Professor; not only could she now recruit others to help her complete her egg Pokédex, but she could gather her eggs and Pokémon together in a convenient Lab, allowing her to gather together unwanted eggs for others to adopt and hatch on their own.

Professor Cypress is probably most famous for being the face of the GPX+ Lab page. The art shown above graces the background of the page and acts as the source of the "voice" that communicates with the users, describing how the lab functions. Cypress also has a few other functions, however, some more hidden than others.

On GPX+, "Professor Cypress" also exists as a bot, an automated, moderator-generated script that assists users in hatching their eggs. By following the link to her party on the Lab page and clicking all of her Pokémon, the script will activate, causing "Professor Cypress" to interact with any Pokémon placed in the user's party from that point forward (as long as they are left in the party for a sufficient amount of time; even programs cannot operate at light speed).

The Professor Cypress bot was programmed to be able to generate almost any novelty and legendary Pokémon by breeding a Mew and Ditto together, something a regular user cannot do. Thus far, it has been used to populate the shelter with various legendary and Novelty Pokémon, from Mew to Pokii.

Professor Cypress can also be battled as an opponent in the Battle Tower. She serves as an introduction to the mechanics of the Battle Tower, with three unique teams that can be battled. Defeating her awards Valuable Items, such as TinyMushrooms and Big Pearls.